20% Off Oracal Sheets & Rolls Use Code:ORAJAN20

Using Shimmer HTV for an All Over Tank Top

When we launched the new Shimmer HTV, I knew exactly what I was going to be using it for. Since the Shimmer heat transfer vinyl is so thin and light, I wanted to be able to do an all over print using the Stardust. Plus, the iridescent look of Shimmer means that an all over design wouldn't be too overwhelming. The Stardust only looks super bright from certain angles which give it a unique look.

To start, I found a unicorn graphic I had saved in the past knowing I needed to use it for something! This was a perfect time. I opened this png in Silhouette Studio and traced it. Once I had traced it, I adjusted the size to be about one inch. I wanted to keep the individual unicorns small so that I would be able to put them all over the tank top. After sizing, I duplicated the unicorns to fill up my entire sheet of Shimmer. Then, I selected all of my little adorable unicorns and mirrored them so they would be facing the correct direction when I heat pressed them later.

After mirroring and making sure the unicorns were in the correct place on my mat. I wanted to make sure my settings were correct. I also made sure to do a test cut before cutting all of these tiny unicorns so I didn't ruin a sheet of my Shimmer HTV. Shimmer is thinner than standard vinyl so I chose Heat Transfer Smooth in Silhouette Studio but edited my settings so that my blade was at a 1. 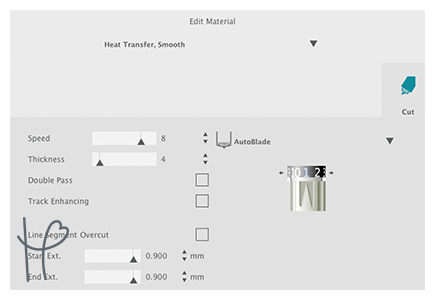 After all the unicorns were cut, it was time to weed. Shimmer is thin and stretchy so it's a little different than working with standard htv. It's still easy to weed, but will stretch while you're pulling away the excess. After weeding for a little bit, I quickly got the hang of how hard to pull on the Shimmer to weed it faster. 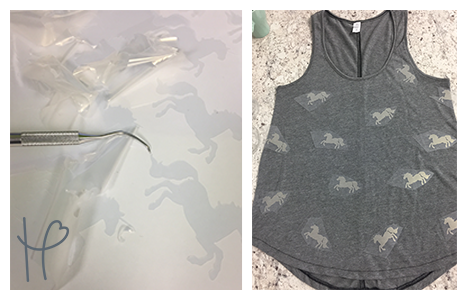 Since this was an all over press, I did have to move it on the heat press a few times, but it was actually easier to control that way. This allowed me to go over the edge and rotate the shirt to make sure the pattern I chose to place the unicorns in didn't look odd. After everything was pressed, it was time to peel! Shimmer peels cold. Since I'm so impatient and I couldn't wait to see the final results, I rubbed the shirt on the counter top to speed up cooling. It was worth the wait though!